This was our favourite destination and part of our Esperance trip, what you have to drive though to get to these four different beaches is part of the awesome fun.

The track consists of very steep rock face climbing, sand blown tight winding tracks, big rock steeps forcing wheel lifts and multiple attempts and a few dune climbs between, all this with the best views 360 degrees around you. After that it’s all got to be done again in reverse which is nearly twice the challenge.

The Orleans Bay beaches will be all yours for the entire day and you will have 4 to choose from, if it’s too windy on one side then take shelter on the other side. It's perfect and crystal clean!
If this sounds like you kind of beach & challenge keep reading. 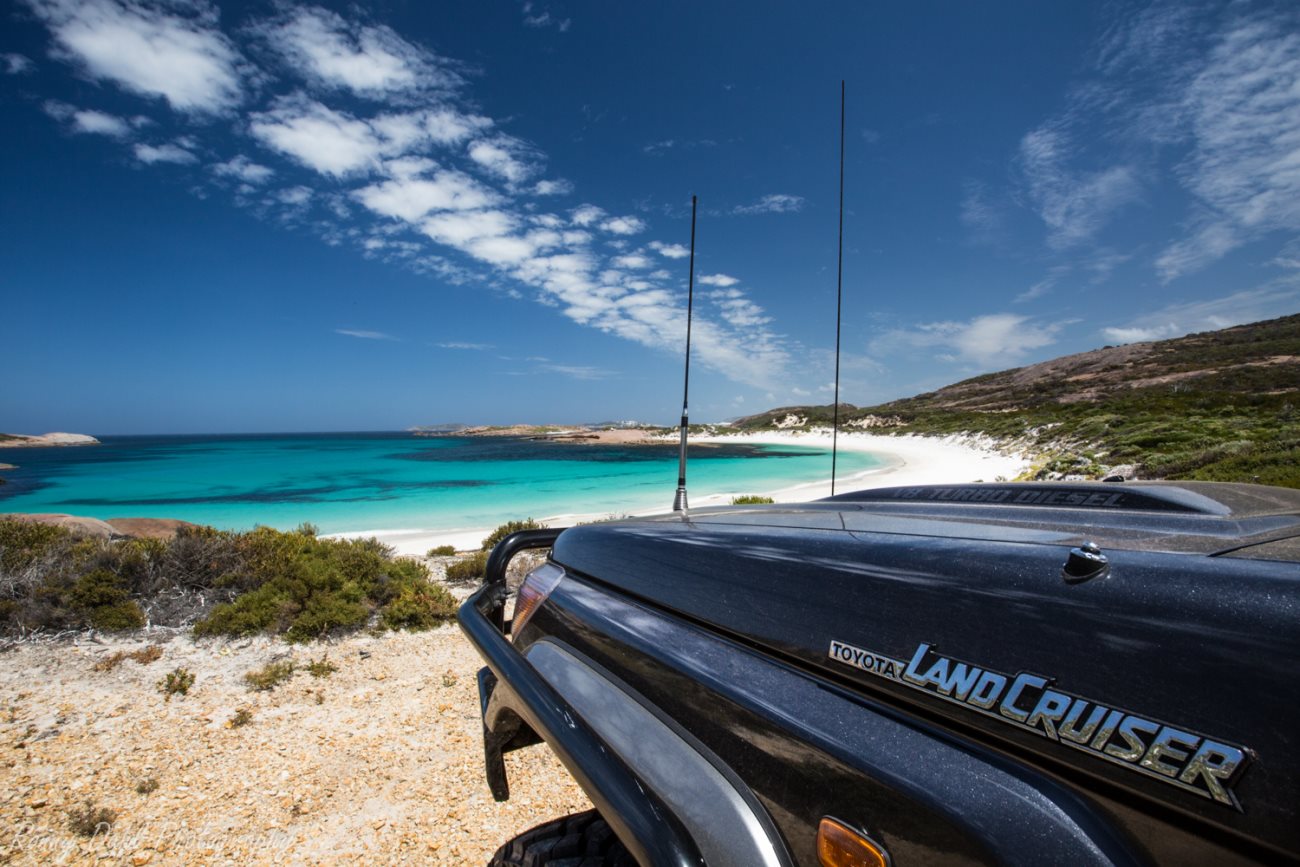 The Track In Detail:

We had 3 vehicles in total on this trip; 79 series Toyota LandCruiser, Holden Rodeo and a Toyota Hilux.

It all started with a 90km drive from Esperance along Fisheries rd. until Orleans bay rd., once at Orleans Bay rd. follow it until we reached Wharton rd., which we needed to follow right to the end.

Towards the end of Wharton rd., Wharton beach will be on the right hand side, keep going past that until you are on Little Wharton Beach. Air down here and let the adventure begin.

From Little Wharton beach two other beaches are visible across the bay; these are two of the four beaches we were trying to get to.

At the very eastern end of Little Wharton beach is a lime stone/sand hill climb which wraps around a rock, we drove up and follow the track around to the top of the rocky hill.

Once at the top we took the steep descent exit at the first possible right turn (it’s only about 50-100m away), once down onto the next rock we headed towards the ocean and followed the rock & ocean around to the left (heading south east), and exited the rock onto the first of the four beaches. That was the easy beach to reach, now for the real fun! 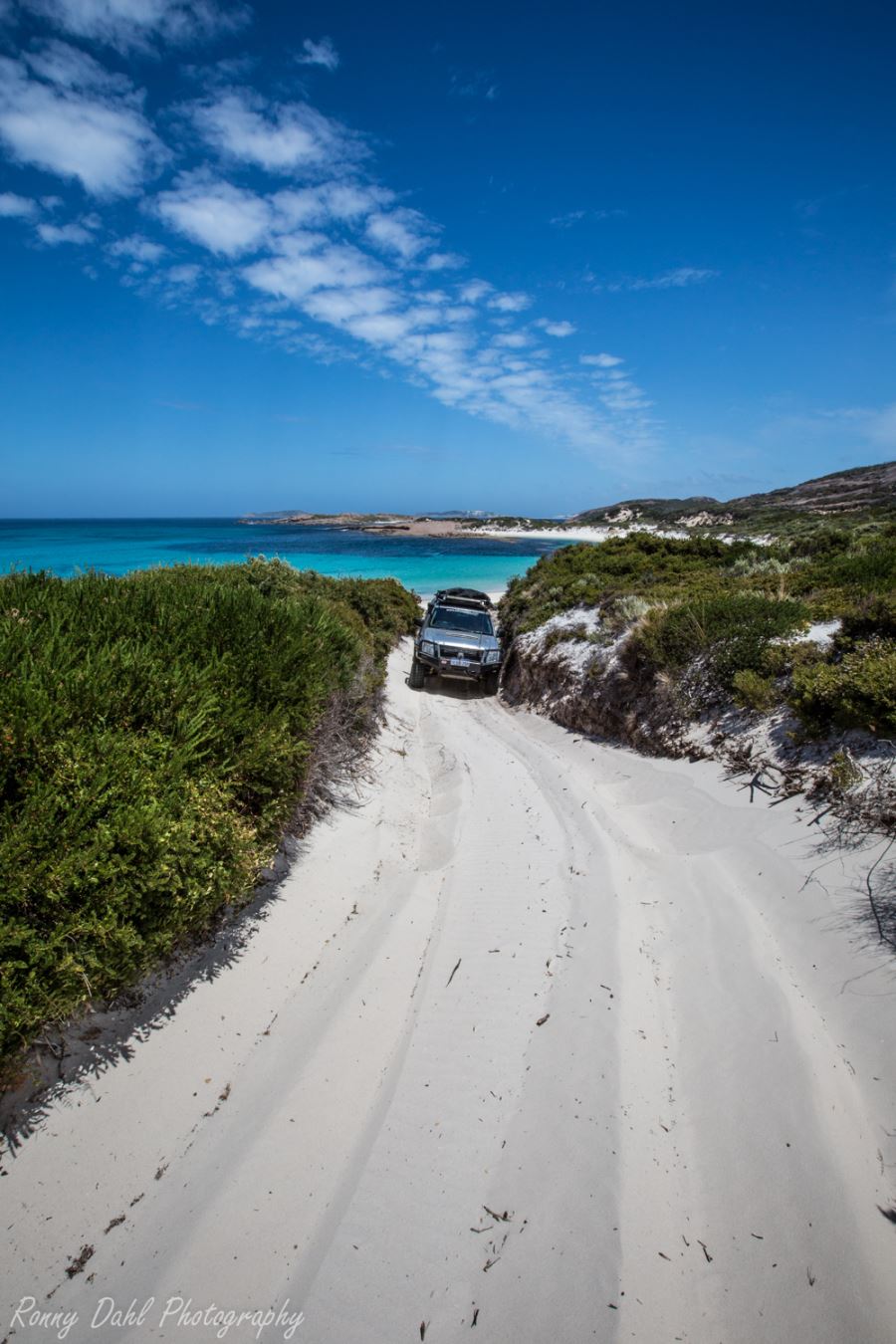 The Holden Rodeo On The Soft Sand Tracks.

We followed the first Orleans Bay beach around until the last steep exit; we took on the exit with care as its sudden steep entry required the perfect approach and speed and beware of very soft sand once up.

The entry exited to a rocky flat area overlooking the first beach. Directly south was a hill/mountain like rock, that steep rock was the only way over to the other beaches (it didn't even look like it was the way through but there are two tracks at the top of the rock), walk it first and decide if you and your vehicle is up for the climb also decide which track at the very top to take down as those two sand tracks will change day by day due to the winds!


So we made it to the top and the view from up there is simply Awesome! You have to see it for yourself!

Take care navigating through the next stage as it will be soft, steep and corkscrew like, all downhill with the occasional rock section in between & very short run ups.

This exact section on the way out claimed a CV from a Holden Rodeo; luckily the well-equipped Rodeo had a front locker so it still was driven in 3 wheel drive.

A few careful long snatches with the cruiser (3 snatch straps at one point) we got the 3wd Rodeo out of the worst part. After that the Rodeo managed to get out unassisted. 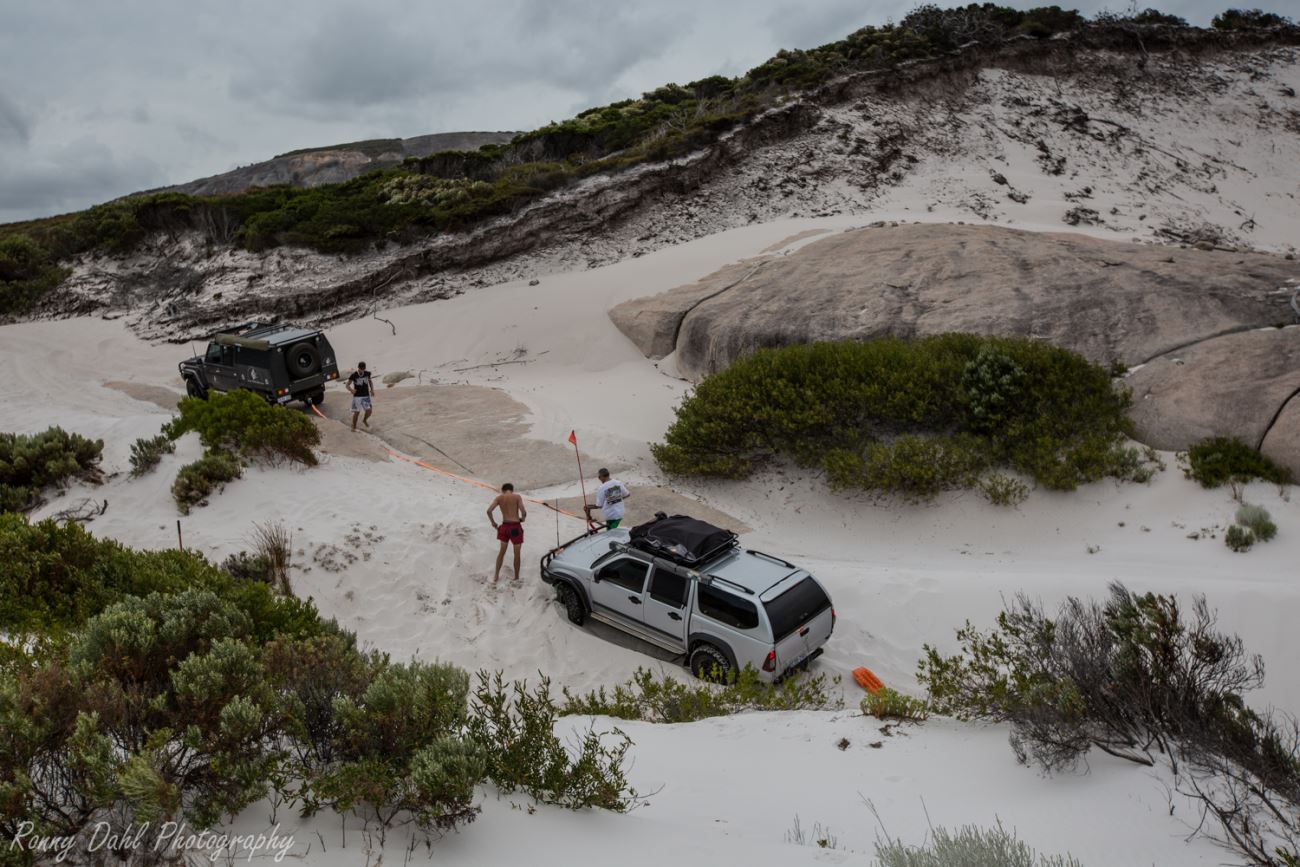 After the tricky section has been past three options are available, one beach on the east side or a choice of two beaches on the west side.

Depending on which way the winds are blowing will depend on which beach you would choose. More than often the west side is better as the winds are usually from the south east.

We took the tracks leading to the first West beach, most of us just relaxed and had a few cold ones on the beach while the kids played in the water and a few others went fishing and snorkelling around the rocks and reef. 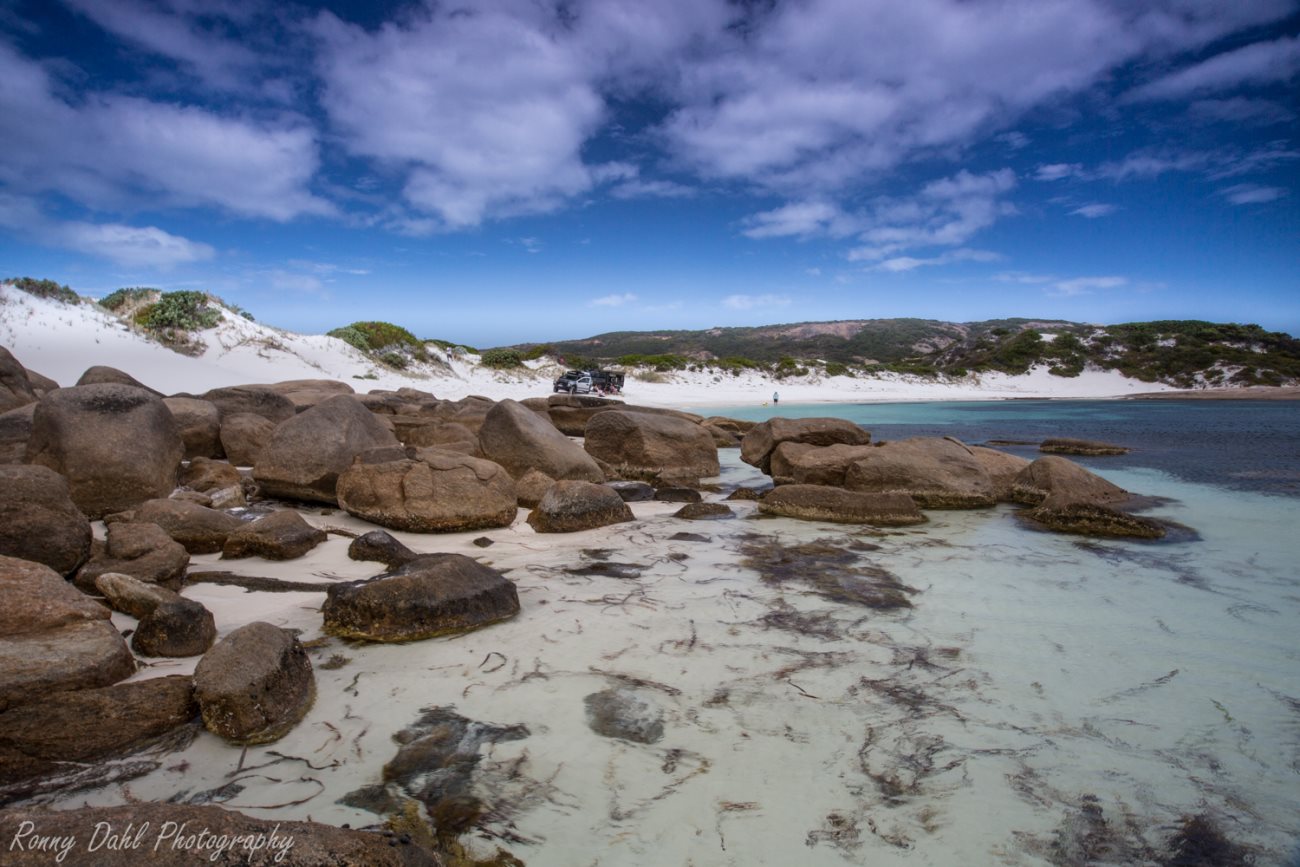 The 3rd beach at Hammer Head.

On our way out we had a bit of trouble with that corkscrewed area of sand tracks but the rest was on par with the entry in difficulty. 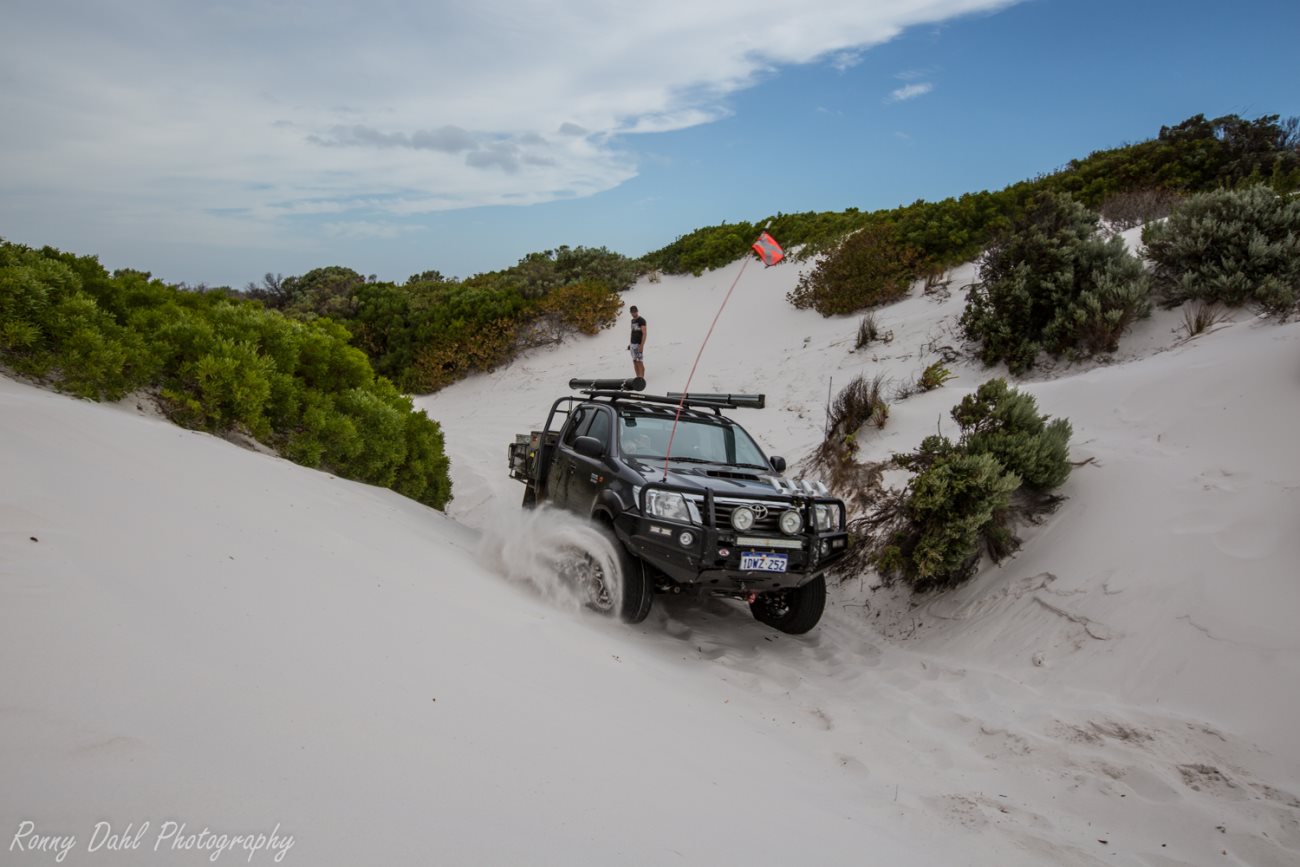 This track should only be attempted with company (2 four wheel drives or more) and rated recovery gear, at least 2 snatch straps! The tracks are of lime stone, rock & soft to hard sand. We recommend 2 inch lift kits with bar work as a minimum for this track given the rock steps and a locker or two would help but is not a necessity.

We found the best tire pressure was around 14-16psi

Remember the safety of your passengers, vehicle and your own well-being is your responsibility!

Things to do at Orleans Bay:

The warmer months are best to make the most of the beach, so anywhere from late October to April.

Air down in the car park.

Start of the adventure, WP1:

WP3 head for the track just south which leads out to another rocky area, head for the water until WP4 is reached:

WP4, turn left onto the beach:

This is the first of the four beaches, for the real fun continue onto WP5

Take this line stone/sand hill up and around to get above the 1st beach, overlooking the first beach you will see a mountain just to the south. This is the only way over to the other beaches. 1st gear low terrain and the entry track to the base of the hill can do panel damage.

Two options are now available and they will change in condition overnight due to the winds so it pays to work out which track is best. They both lead to the same place. Continue onto WP7, another rocky area at the bottom of a sand dune.

From here head south and use the tracks to reach the beach you wish to, take extreme care in the next part of the tracks as they will change overnight and more than likely have extreme angles like they did when we were there.

From here you now have the choice of 3 more beaches, enjoy!

Be even more careful on you return everything is now up hill and there are only short run ups.

Do not travel by yourself, at least two vehicles is a must. 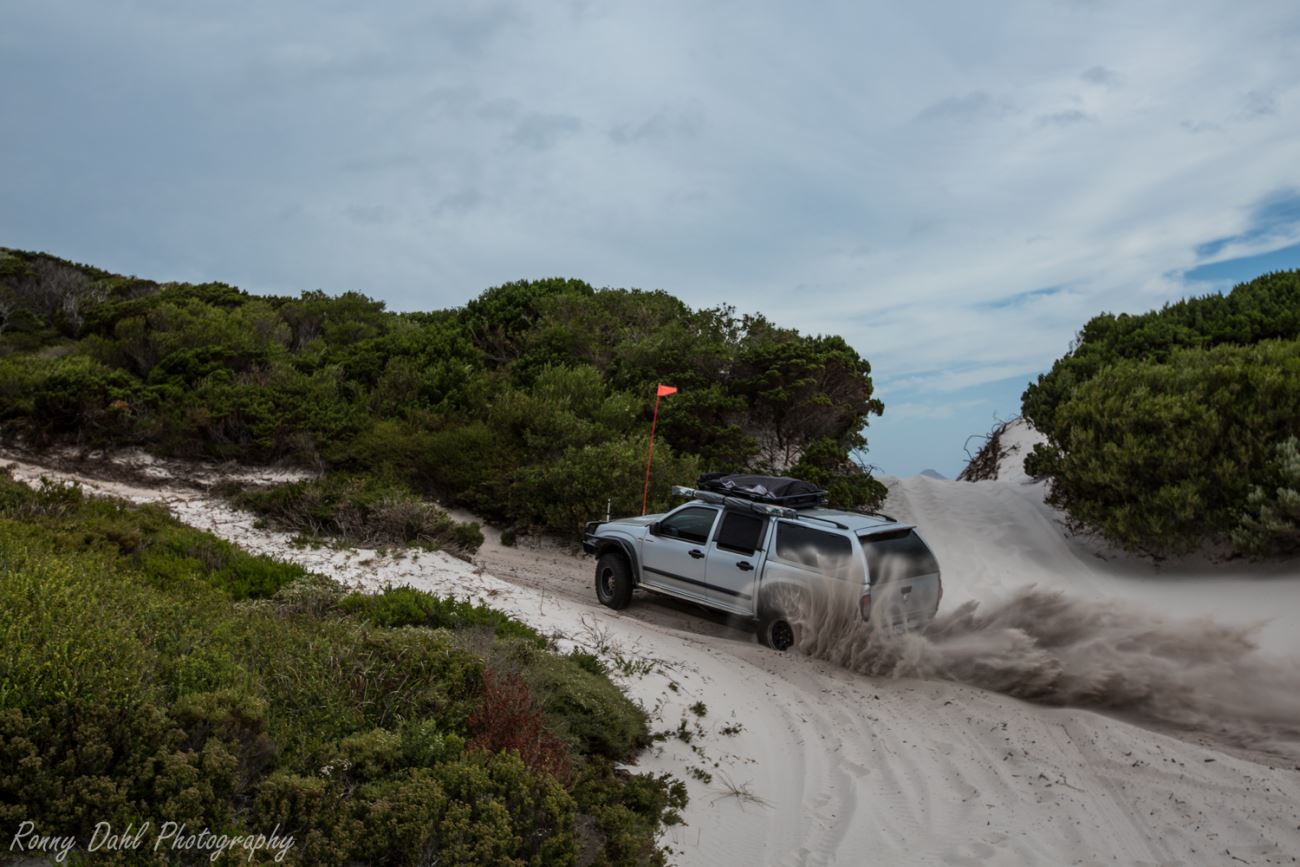 For Other 4x4 Tracks In The Esperance Area See Here.