Explore the massive Blow Holes along
The Zuytdorp Cliffs.

Zuytdorp Cliffs and The Blow Holes:

Zuytdorp cliffs (pronounced Zurtoff) is the biggest and longest cliff formation along the west Australian coast .

The cliffs got its name from a Dutch shipwreck, the Zuytdorp. The Zuytdorp was wrecked in 1712 at the cliffs.

It wasn't until the 20th century that part of the wreck was discovered about 40km north of Kalbarri.

It is thought that some crew survived the wreck and climbed up the cliff walls, these survivors are believed to have joined/integrated with the indigenous population.

Exploring the Zuytdorp cliffs along the coastline really gives you a feel of the power that the  Indian ocean has and the helplessness of the crews of disabled ships would have felt while getting smashed against the cliffs and hidden reefs.

Along the Zuytdorp cliffs are massive and tiny blow-holes, the most known and well signed are Thunder bay blow-holes and False Entrance blow-holes.

Thunder Bay really looks out of this world with a massive reef shelf which gets covered by water from the waves. Only a photo can explain the beauty of this area. 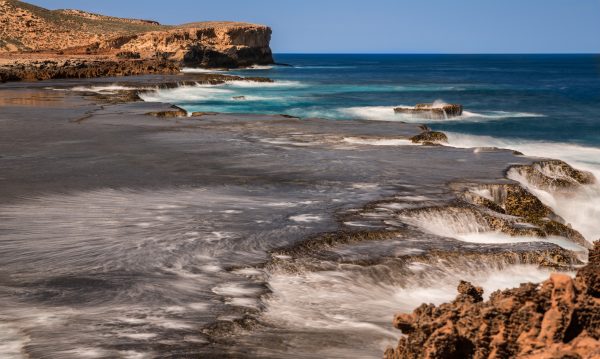 The blow holes are located to the north of the bay and are very big; take good care as there are some smaller holes around that are not always easy to see until you're only a few meters away, some are still big enough for a person to fall in.

Children under the age of 12 should not be walking around the cliffs and blow-holes it's just too dangerous.

The swell was only 1.5 meters when we visited Thunder Bay so no water was jetting out of the blow-holes, however during bigger swell sea water will come rushing out of the holes with great force.

Even with a small swell you still get a sense of the power by the noise and air blowing out the holes.

Just south of False entrance are the False Entrance blow-holes, tread carefully around these and I recommend keeping kids away from the blow-holes as they are 60-100m deep. Anyone unlucky enough to fall in will not make it up alive again.

Like any cliff areas there are risks involved, however using common sense there is no reason anything bad should happen.

If the swell is big water will be jetting out of the blow-holes, even with a small swell the pressure will force the wind up the blow-holes and make an intimidating raw.

Leave Blow Holes And Go To 4 Wheeling In Western Australia.